Etihad Airways and flydubai to resume flights to Doha

Does Qatar seek to exclude Bahrain from Gulf reconciliation?

Saudi Embassy will reopen in Doha within a few days: Saudi FM


Amid the stress of a rising second wave of COVID-19, comic book fans found something to celebrate this September. Marvel Studios announced the casting of its first on-screen Muslim superhero, Kamala Khan, the alter-ego of Ms. Marvel.

Much like https://www.cbc.ca/news/entertainment/ms-marvel-canadian-heroes-1.5746524 Canadian teen actress Iman Vellani who was plucked for this role, Kamala has been a virtual unknown outside of comic fandom despite being a sensation since her series debut at the https://www.diamondcomics.com/Home/1/1/3/237?articleID=156090 top of comic book sales charts in 2014.


It should be no surprise then that Marvel Studios decided to capitalize on this success and signed Kamala for her own TV series on Disney+ for an anticipated debut in https://www.radiotimes.com/news/on-demand/2020-09-22/ms-marvel-release-date-disney-plus/ late 2021 or early 2022.

She has an ability to https://mpcaaca.org/wp-content/uploads/2019/10/Hosein-Ms-Marvel-Final-1.pdf destabilize stereotypes of Muslims while reinforcing ideas about American exceptionalism. In the hands of different writers in various comic iterations, she has appeared as multi-dimensional and stereotype-breaking, but also as a one-dimensional figure that advances Islamophobic themes. 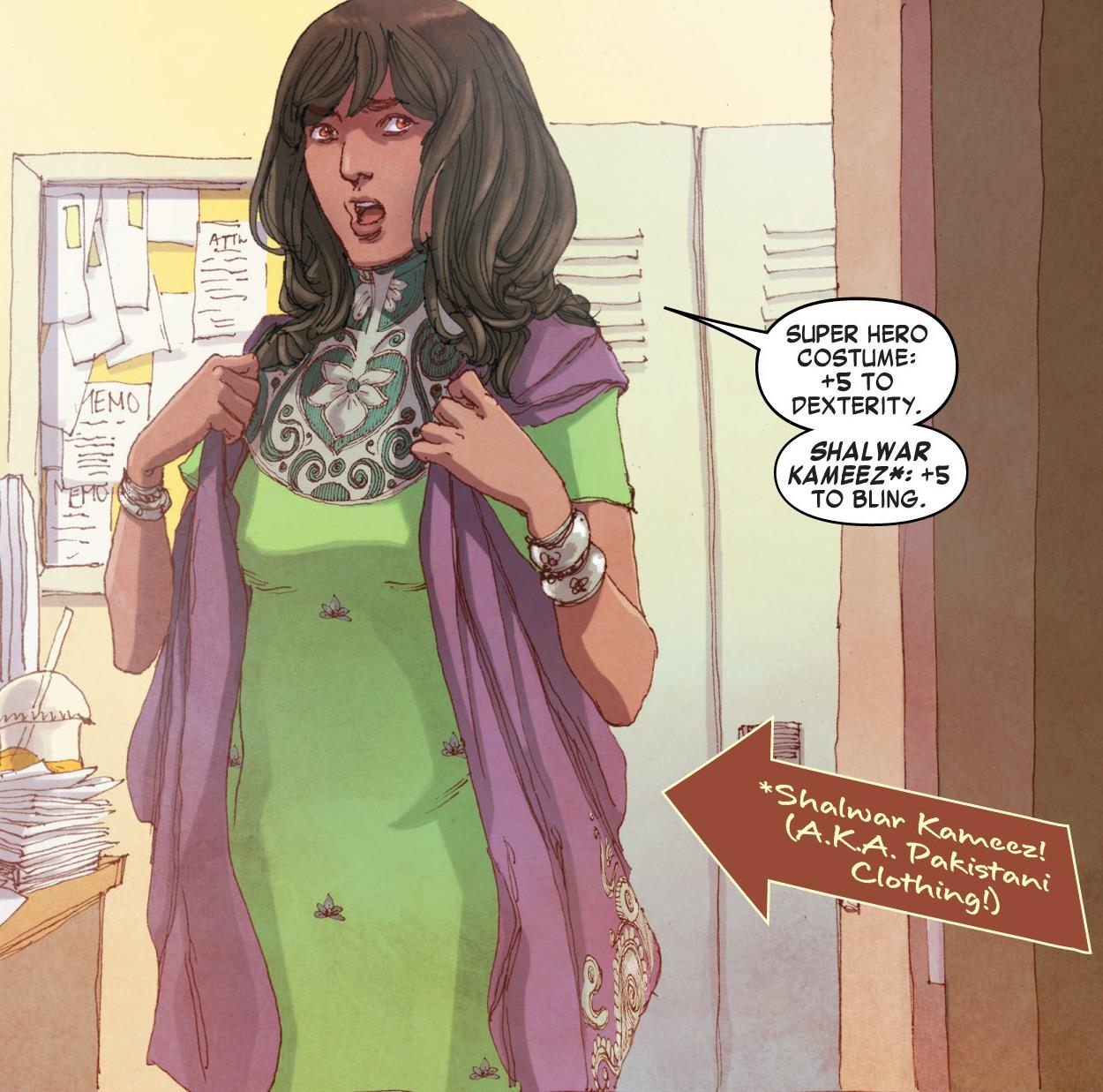 It may seem that Marvel Studios is taking a big risk spotlighting a Muslim character when we are living in a time of rising https://www.bloomberg.com/news/articles/2018-03-09/anti-muslim-incidents-are-increasing-across-america anti-Muslim hatred in https://www.theguardian.com/commentisfree/2020/sep/28/europe-social-pandemic-hatred-muslims-blm the West. But while there has been a resurgence of Muslim superheroes in American comics after 9/11, some of these representations reiterate stereotypes.

Muslim characters underwent a mini-makeover in popular culture after 9/11. Characters emerged from being buffoonish villains to figures who gave off the appearance of depth while simultaneously regurgitating stereotypes. American studies and ethnicity scholar Evelyn al Sultany coined the term ‘simplified complex representation’ to describe this approach in her book, https://nyupress.org/9780814707326/arabs-and-muslims-in-the-media/ Arabs and Muslims in the Media: Race and Representation After 9/11.

After reading Sooraya Qadir’s debut, it became obvious to me that comics found a new way to a new way to sensationalize Muslim representation.

To me, Kamala seemed to be the rare glimpse of hope that existed on the other side of the rainbow if we just characterized Muslims — who make up https://www.pewresearch.org/fact-tank/2017/08/09/muslims-and-islam-key-findings-in-the-u-s-and-around-the-world/ almost one-quarter of the world’s population — as something more nuanced. And she delivered on that front, particularly in her early days.

Readers met her as a Pakistani American that spoke Urdu. This means we saw representation of Muslims in the West escape the frequent stereotypical assumption that all Muslims are Arabs and vice versa. 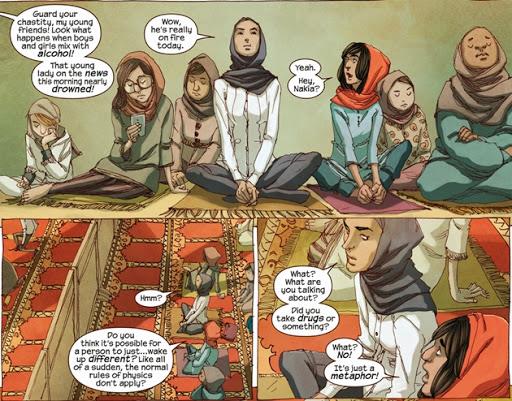 In Ms. Marvel’s earlier volumes written by the Muslim writer, and white Muslim convert, G. Willow Wilson, we saw Kamala anointed with her superhero mantle to the tune of https://allpoetry.com/Amir-Khusro Amir Khusro’s poetry. We saw her juggle her schedule between battles and mehendis, and even got a glimpse of her great-great grandmother’s move from India to Pakistan during Partition.

Back then, I remember comic book store clerks telling me how popular Ms. Marvel was with customers. The print collection of the series sold https://bleedingcool.com/comics/ms-marvel-sold-half-million-trade-paperbacks/ half a million copies alone. As Wilson notes, https://www.youtube.com/watch?v=piWo4200G0U & t=179s the first issue had had eight separate printings and its digital edition became Marvel’s best-selling digital comic of all time. Its first volume, released in 2014, was ranked again amongst the top five in sales rankings in https://icv2.com/articles/markets/view/46793/diamonds-top-500-graphic-novel-september-2020 September 2020.

I remember thinking that this Urdu-speaking Muslim powerhouse could be the start of a new type of Muslim character. She was proof that creators didn’t need to recycle the tireless oppressed Muslim woman or terrorist Muslim male tropes for sales.

But following the success of the Ms. Marvel series, Kamala appeared in Marvel’s Champions series about a team of teenage superheroes. Perhaps Marvel intended to further boost the popularity of the already-successful Ms. Marvel series by bringing in Mark Waid, a high-profile non-Muslim white writer, who authored the popular comic series https://www.penguinrandomhouse.ca/books/603561/kingdom-come-by-mark-waid/9781401290962 (and award-winning graphic novel) Kingdom Come and others.

In Champions, some tired stereotypes surfaced. In the third issue, the team flies to a fictional South Asian country. There, they rescue https://bleedingcool.com/comics/its-marvel-comics-vs-fundamentalist-islam-in-todays-champions-3 hijabi Muslim girls from violent men who conform to stock villain Muslim stereotypes like the https://ascmag.com/articles/true-lies-tests-cinemas-limits terrorists seen in Hollywood movies such as True Lies.

Here, Kamala is effectively used as a racist weapon against brown men and is depicted to suggest proof of western superiority. Sadly enough, I was concerned she could be used this way before she actually was.

I was reminded that such tropes may exist simply because of implicit bias as opposed to https://www.comicsbeat.com/ms-marvel-is-marvels-1-digital-seller/ profitability. 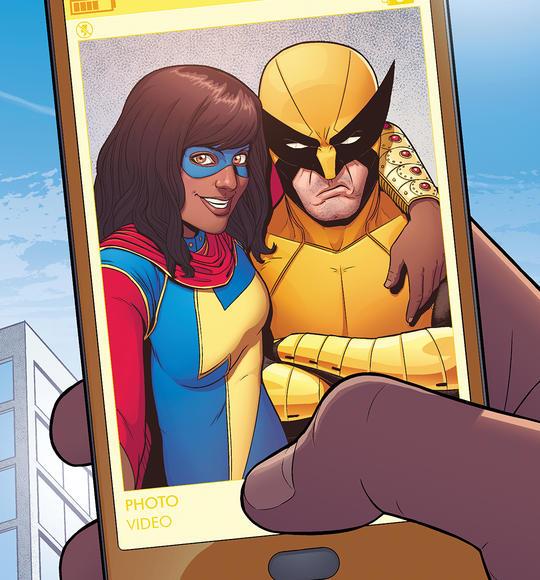 For now, we should celebrate the debut of Marvel Cinematic Universe’s first Muslim superhero. I have hope that the Disney+ series will do her justice as its https://www.hollywoodreporter.com/heat-vision/ms-marvel-series-works-disney-1234216 showrunner is the https://www.theguardian.com/tv-and-radio/2020/nov/16/i-feel-joy-bisha-k-ali-struggling-standup-ms-marvel-maestro-muslim-superhero stand-up comedian and writer https://www.imdb.com/name/nm9946590/ Bisha K. Ali, known for incisive commentary.

If anything of the likes of Kamala as a racist weapon to prove western superiority is featured, I can’t say there will be much cause for celebration.