The 2020 drastic oil price drop, induced by the ever-frightening coronavirus and the Saudi-Russian spat, has ravaged business interests all across the world.

US oil producers are facing a new reality – instead of a seemingly watertight growth trajectory, 2020 will most probably witness a decline in annual oil output by some 0.5mbpd, to the level of 11.76mbpd if one is to believe the last EIA forecast.


Small and medium-sized US producers are bracing for a series of bankruptcies, the ones with more robust political connections are trying to salvage a deal that would provide some hope for a quick price hike, all the while the majors are cutting CAPEX and postponing major investments.

Yet it is not only oil producers who should brace for a tiny revolution – LNG exporters will be the next in line, as can be judged from the current state of things in Europe.

The double whammy of oil prices plummeting and coronavirus diminishing LNG demand is still in its relative nascency in Europe. March 2020 has seen the highest-ever level of monthly LNG imports into Europe, with 10.45 million tons of LNG arriving across 170 cargoes. With prices dropping to unprecedented lows, this was very much to be expected, the warm winter of 2019/2020 notwithstanding. Then COVID-19 cut all the hype short. Chinese LNG demand is still moving back to the pre-COVID levels, India has declared a total lockdown, Japan has now declared a state of emergency until at least May 06 and South Korea already asking term LNG suppliers for delays on the back of missing demand – against such a background, the loss of the European market outlet ought to hurt.

Qatar, supplying the Asian LNG market with 4-5 million LNG tons per month, must confront demand faltering in its core export market for at least several months now. Despite landed LNG prices remaining lower than 2/MMbtu in all of Europe’s main economies, Qatar’s low production costs, massive resource base and lack of domestic competition place it in a favorable position when it comes to a LNG race to the bottom in Europe. For many analysts, the overarching dilemma of the European gas market was whether US LNG could prevail over Russian pipeline supplies, yet now the scope for competition expanded exponentially. Apart from US LNG and the Gazprom-supplied pipeline gas, Qatar will be also competing against Russian LNG in the form of increasing Yamal LNG supplies. 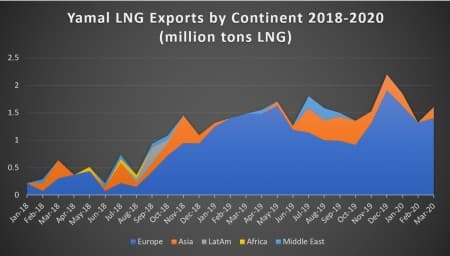 Yamal LNG exports to the Zeebrugge LNG terminal in Belgium have reached an all-time high in March 2020, one of the main transshipment points for Russian LNG, partially on the back of Zeebrugge commissioning a 5th storage tank for Russian volumes. Although not a peak export level per se, neither to Europe nor globally to all continents (both took place in December 2019), there is a strong indication that NOVATEK and its partners on Yamal LNG are starting to prioritize maintaining market share over increasingly slim profits. With the Chinese market – heretofore a significant pull factor for Yamal LNG volumes – all but non-existent for March and April-arriving cargoes, the battle for Europe seems to be intensifying.

The following might sound a bit illogical, given that Europe is currently in the throes of COVID-19 and countries across-the-board experience monumental difficulty in keeping this year’s economic growth numbers positive, yet there is a powerful counterargument for LNG deliveries to Europe not to decrease as steeply as oil demand decreased. That reason is the all-time low price of LNG. Qatar also understands this and has been palpably seeking to secure the UK, Benelux and Italian market where Qatargas has long-term commitments, all the while avoiding spot supplies to Spain and elsewhere. The simultaneous push of Qatar and Russia will leave very little space for American LNG – just as it reached a peak this February at 3.1 million LNG tons, if things stand as they are April deliveries will fall by 50% from that all-time high.

The dynamics of Chinese demand will also propel Qatar, Russia and the United States to fight for European LNG demand. Qatari LNG deliveries to China have been remarkably seasonal – following the January peak demand winds down in the spring months, hence the corona virus-induced demand drop in China did not have that much of a catastrophic effect on it. Russia’s Yamal LNG will be hindered by the freezing of the Northern Sea Route (NSR) – a voyage which necessitates significantly more time and effort than a quick transshipment in Belgium or the Netherlands – and it will be only from June 2020 onwards that LNG cargoes from Yamal start doing the entire NSR. Hence, the current state of the market suggest that the North Sea triangle – Benelux, UK, Northern France – will witness a grand contest where profitability numbers are by no means the most pertinent cause of action.

By Viktor Katona for Oilprice.com

Qatar has made enormous progress in digital...